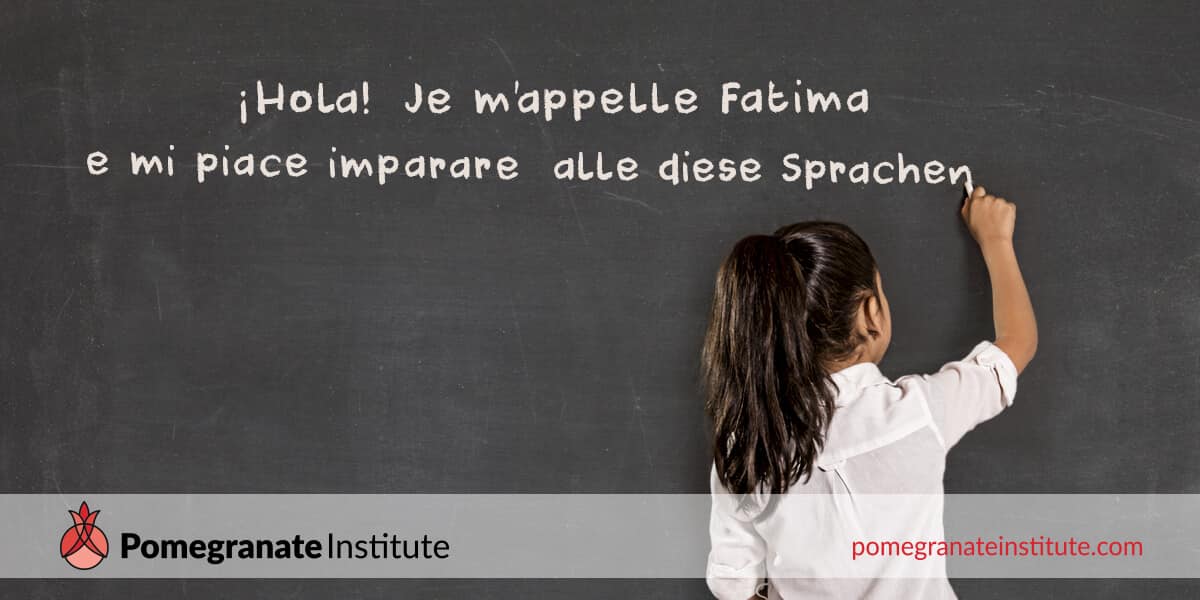 I grew up bilingual and my parents weren’t even aware of all the discussions people were having on multilingualism in children. Parents are very much concerned about this nowadays. They wonder, whether their child, who is brought up in a multilingual environment, may face delayed speech development, or whether he will start mixing up the languages he already knows. Parents are curious to explore the latest educational tricks, and avoid problems of such kind.

Well, I would like to explain some facts about multilingualism in children, both from a biological point of view as well as from my personal experience.

I grew up bilingual. People around me were speaking Italian and Sicilian (yes, Sicilian is a different language, not just a variation of Italian). My parents and everybody around me used to Code switch all the time. My mum mostly spoke in Italian to me, but she used to talk in Sicilian with others and I could see both languages in action in different situations. At school, we used to speak in Italian- most of the time.

My point is, nobody stressed over identifying the best way to let their children grow up with different languages. Nobody asked the teachers or the paediatricians. My friends and I had an ordinary upbringing, no fancy teaching & psycho-social methods needed to be identifies & put in place. Guess what, I was perfectly capable of using both languages in the appropriate context with the respective individuals! I simply switch from one language to the other, to me, this was normal.

Multilinguals optimise their ability to switch from one language to the next through the usage of colourful linguistic elements.

Some people believe in the rule one ‘parent-one- language’, or always using the same language in the same situation etc. There is no need for such unnecessary complications as Code switching is a normal and healthy way of expressing yourself & your child will be able to pick up the respective language with no difficulties at all.

Forcing yourself to speak in one particular language in a given instance, will not occur as natural, neither to you, nor your child. From my personal experience, I tend to speak half Italian/half Sicilian with some friends, Italian with my husband and family when other people are around, but Sicilian when we are alone. I also speak Italian with them when we disagree or argue over something and in Sicilian when we are having a laugh.

Children are very capable & sensory beings and if they feel that you are uncomfortable or behaving unnaturally, then they will surely pick up on these emotions & habits of yours. Try not to speak only one language with your child, speak naturally and do the code-switching without any hesitations.

Code switching also creates a bond amongst people. When communicating in English, with a sudden switch to Italian, German or Arabic (your language of comfort), this probably is the best way to share a joke, a subtle & natural ice breaker.

In my workplace, Pomegranate Institute, the majority of my colleagues are multilingual, some of them speak up to 5-7 languages! And it came to them naturally, all it takes is a good teacher, a receptive student & regular practice!

A multilingual upbringing is encouraged as it is a powerful mechanism to express our thoughts in creative and multiple ways. In addition, there is no scientific evidence that multilingualism causes delay in young children.

Researchers2 observing the language connections in the brain, report that when the attendees deal with languages which share similar linguistic structures, they record suppressed activation in the areas of the brain, where those structures are processed. On the contrary, when the attendees detected differences in the linguistic structures they dealt with, brain activation is said to have increased.

Therefore, even for those who did not grow up in a multilingual environment, learning and using more languages at the same time is a powerful exercise to keep the brain in motion, entertained & fresh.

Different cognitive skills are involved in such type of exercises, to name a few; analysing and selecting skills, the ability to recognize similarities and find differences, empathy, accommodation ability, and much more.

Changes in the brain structure have been detected: higher density of grey matter, and, in particular, the dorsolateral prefrontal cortex is bigger in multilinguals, as this part of the brain is responsible for executive function, problem solving, multitasking and more3.

So- what is left for me to say is- embrace language learning. Whilst writing this blog, I have a sea of languages surrounding me & the desire to learn never goes silent in me. Try out our Multi Language classes (MLC- 4 languages to choose from, 3 will be taught in one class) as well as our cognitive training to enhance your focus, information intake & retention. Discover what your brain is truly capable of!

Every language opens the door to a new world- don’t deny yourself, nor your friends & family of the Right to explore our colourful & gorgeous planet!